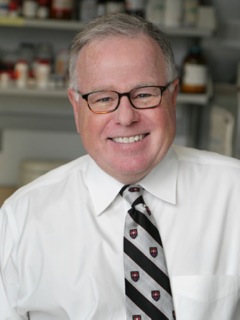 Dr. William Douglas Figg received his BS in Biology from Georgetown College, his BS in Pharmacy from Samford University and his doctoral degree from Auburn University. He completed his internship at the University of Alabama at Birmingham Hospital and his fellowship in Drug Development at the University of North Carolina, Chapel Hill. He also received an MBA degree from a combined program at Columbia University and the London Business School. Dr. Figg joined the National Cancer Institute in 1992. The following year he became head of the Molecular Pharmacology Section and the Clinical Pharmacology Program. Since then his research has focused on using pharmacological principles to optimize the treatment of cancer and on identifying genes involved in the development of prostate cancer. He has been the PI of over 25 clinical trials for men with metastatic prostate cancer. Dr. Figg has over 625 peer-reviewed publications. He has received numerous awards and honors, including the Leon Goldberg Award from ASCPT, the Allen J Brands Award from US Public Health Service, the Russell R. Miller Award from ACCP, the Andrew Craigie Award from AMSUS and the Sustained Contribution to the Scientific Literature award from ASHP. Dr. Figg is adjunct faculty at Columbia University’s College of Physicians and Surgeons and serves as adjunct at several schools of pharmacy throughout the country.