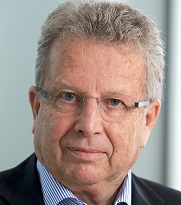 Professor Dietrich Keppler received his MD degree from the University of Freiburg, Germany, and subsequently specialized in Biochemistry and became professor of Biochemistry at Freiburg University. In 1987 he became Full Professor of Tumor Biochemistry at the University of Heidelberg and head of the Division of Tumor Biochemistry of the German Cancer Research Center (DKFZ). His pioneering contributions in the transporter field included ATP-dependent transport across the hepatocyte canalicular membrane and mechanisms of cholestasis; elucidation of the function of the multidrug resistance protein 1 (MRP1; ABCC1) as a conjugate export pump; discovery, cloning, and characterization of the apical multidrug resistance protein MRP2 (ABCC2) deficient in Dubin-Johnson syndrome; localization and characterization of MRP3, MRP4, and MRP5. The localization and characterization of the human uptake transporters OATP1B1 and OATP1B3 enabled the generation of multiple-transfected polarized cells stably expressing OATP uptake transporters and MRP efflux pumps as in vitro models for vectorial transport. Dietrich Keppler has received numerous awards including: Prix Galien (Galenus award) for research on the role of cysteinyl leukotrienes in endotoxin action (1985); Heinrich Wieland Prize for research on metabolism and analysis of leukotrienes (1987); Lucie Bolte Award of the German Association for the Study of the Liver (GASL) for achievements in research on liver diseases (2004); International Adolf Windaus Prize for outstanding publications in the field of bile acid research (2016). He is the author or coauthor of >300 publications, with >34 400 citations (Hirsch index=98).