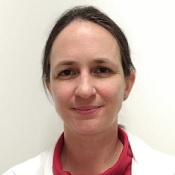 Viola Pomozi is a biologist, obtained her PhD in the field of molecular biology. She has been working at the Institute of Enzimology (Research Centre for Natural Sciences, Budapest) in the research group of dr. András Váradi since 2005. From 2015 to 2018 she joined the laboratory of dr. Olivier Le Saux at John A. Burns School of Medicine, University of Hawaii as a postdoctoral fellow. In both research groups they were focusing on an ABC trasporter protein, ABCC6. Mutations in this gene lead to pathological calcification in soft tissues. Using Abcc6 knockout mice they are investigating the molecular mechanisms of soft tissue calcification and are testing potential preventive treatments. Their recent findigs indicate that supplementing pyrophosphate, an endogenous calcification inhibitor, may be effective in the prevention of soft tissue calcification.