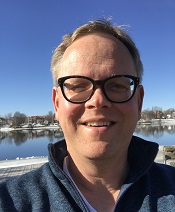 Edmund Kunji studied Physics, Mathematics, Biology and Chemistry at the University of Groningen and Visual Arts at the Art Academy Minerva, Groningen, The Netherlands. He obtained an MSc in Biology in 1990 and an MSc in Chemistry in 1991. He carried out his postgraduate studies at the Department of Molecular Microbiology, University of Groningen under the supervision of Profs. Konings and Poolman, and in 1997 obtained his PhD in Mathematics and Natural Sciences with the distinction Cum Laude. From 1996 – 2000 he was an EMBO Postdoctoral Fellow in the group of Dr Richard Henderson at Medical Research Council, Laboratory of Molecular Biology, Cambridge. In 2000 he was appointed Research Group Leader at the Medical Research Council Mitochondrial Biology Unit by Prof. Sir John Walker. In 2003 he received the Young Investigators Award of the European Molecular Biology Organisation and in 2005 he was elected Staff Fellow and Director of Studies of Trinity Hall. In 2019 he became Professor of Biophysics at the University of Cambridge. He works with his group on transport processes in mitochondria, which are important in human physiology and disease.