Cytochrome P450 (CYP450) induction-mediated interactions are one of the major concerns in clinical practice, as an ever-increasing number of patients undergo multidrug therapy. Induction is defined as an increase in the amount and activity of a metabolizing enzyme due to de novo CYP450 protein synthesis or stabilization of CYP450 enzymes upon drug exposure. Due to the relatively broad substrate specificity of CYP450 enzymes, metabolic routes of elimination for many substrate drugs can be altered when these enzymes are induced by concomitant xenobiotic administration/exposure (i.e. mixtures, chemical‐chemical, drug‐drug). Induction of a CYP450 enzyme may cause rapid clearance of substrate drugs, which could lead to a reduction in their therapeutic efficacy. Induction may alternatively create an undesirable imbalance between detoxification and activation as a result of increased formation of reactive metabolites, leading to increased risk of metabolite-induced toxicity.

The most common mechanism of CYP450 enzyme induction is receptor-mediated transcriptional gene activation. At the molecular level, CYP450 induction is initiated by the binding of an endogenous or exogenous ligand to one of the nuclear receptors/transcription factors:

PXR primarily induces the transcription of the CYP3A and CYP2C families, CAR induces the CYP2B family and AhR induces the CYP1A family. Historically, induction via CAR, PXR and AhR was thought of as mainly being important in facilitating the detoxification processes, but it has become increasingly apparent that they have much broader functions in various physiological processes like glucose- and lipid metabolism and homeostasis in case of PXR and CAR, and cell development and immune response in case of AhR.

According to the regulatory agencies, CYP450 induction potential of a compound should be studied in vitro using primary human hepatocytes. Due to the high inter-individual variety, these studies should be performed on hepatocytes from at least three donors. The in vitro system used should be robust and reproducible and include appropriate positive and negative controls.

Did you know…?
Induction potential is assessed via incubation of hepatocytes in culture with a test article to and is reported as the fold-change in CYP enzyme mRNA levels or the fold-change in enzyme activity, using selective probe substrates. Although both endpoints are accepted by regulatory authorities, it is mentioned that in case of activity studies, induction may be masked by concomitant inhibition. Therefore, the industry practice is to perform both read-outs for a complete study design.

Induction results should be evaluated separately for each donor. If results from at least one donor indicate that the drug has potential to induce the enzymes, further investigation is recommended either by using a mechanistic model, or via conducting clinical DDI studies with a sensitive index substrate.

The default regulatory grade assays as performed at SOLVO are designed to meet EMA, FDA and PMDA guidelines: test drug concentrations are based on the expected human plasma drug concentrations and dose, and solubility and cytotoxicity are evaluated as well. The CYP450 induction assay delivers fold-induction data normalized to vehicle control which is compared to positive control responses. Emax and EC50 values are produced to estimate DDI risk and to determine whether follow-up clinical studies are required. Because of the high inter-individual variety, three different donors are used for CYP450 induction assay as it is recommended by regulatory agencies.

CYP450 induction assays are conducted with sandwich-cultured hepatocytes (SCH). The cells are thawed, plated and covered with extracellular matrix-, then incubated for 48-72 hours prior to conducting the activity assays, and/or cell lysis for mRNA quantitation. Beside the TA(s) at multiple concentrations (usually 5-7 concentrations starting from at least 30 times unbound Cmax, if feasible), SCH are incubated with positive (Table 1) and negative controls for induction (flumazenil) and cytotoxicity (chlorpromazine) as well, for the entire duration of the assay. Actual concentrations of the test article in the incubation medium are determined to evaluate degradation/metabolism of the test drug.

After treatment, the medium containing the Test Article or induction controls is removed, and activity of the CYP450 enzymes is evaluated by incubating treated and control cells with a cocktail of selective probe substrates and quantitation of the metabolites formed from the incubation medium by LC-MS.

Table 1 – Table with information on main control inducers, marker substrates and the metabolite that is formed and monitored (in case of activity assays).

For CYP450 mRNA quantification, cells are lysed, and total RNA is extracted via a multistep procedure, then cDNA is generated. Target mRNA-levels (CYP1A2, CYP2B6, CYP2C8, CYP2C9, CYP2C19 and CYP3A4) are then analyzed by real-time quantitative PCR along with a normalizing control. In addition to the functional controls, cell attachment and morphology are inspected throughout the assay, and upon assay completion, potential cytotoxic effects are addressed as well using the LDH method. 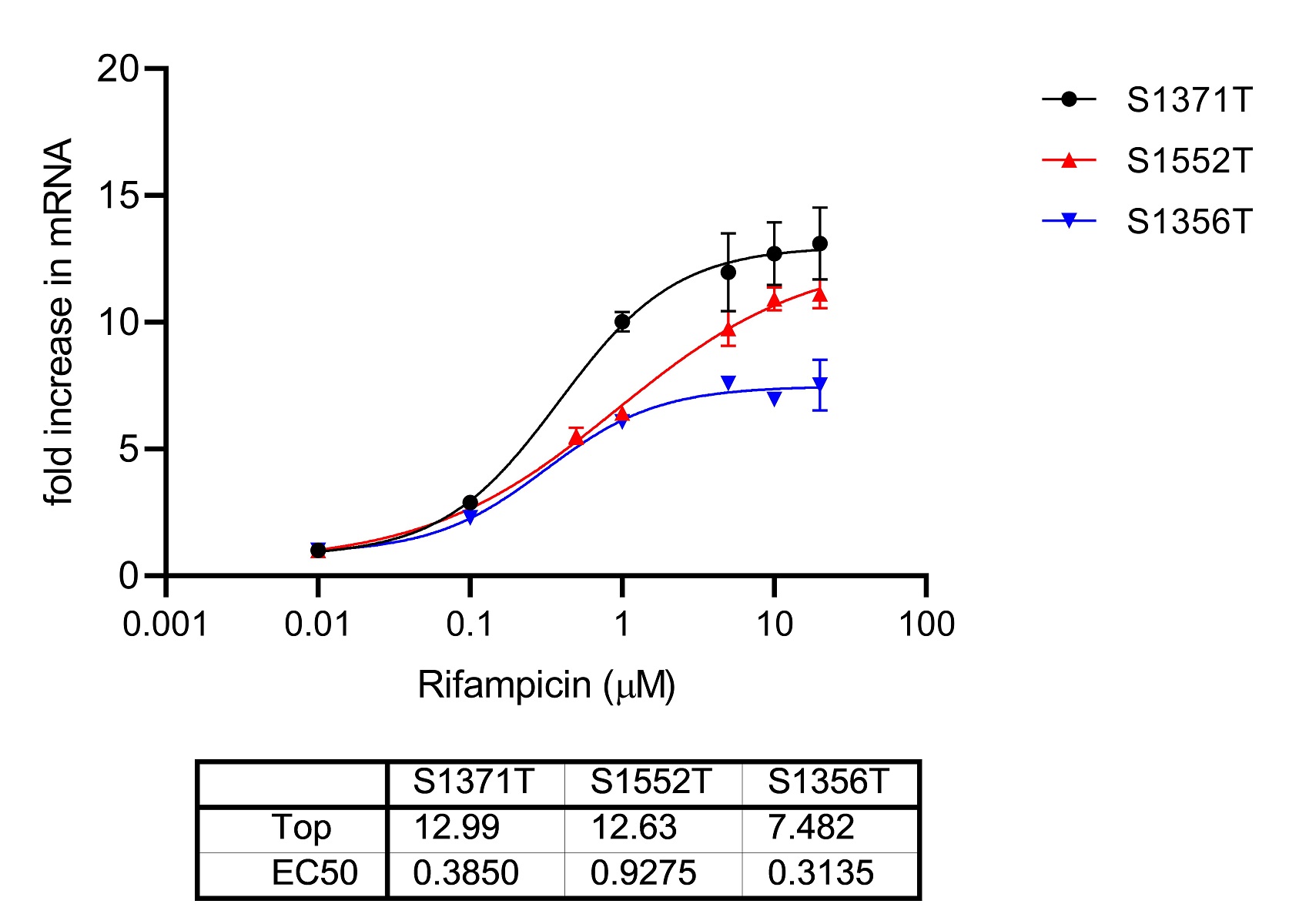 Figure 1 - Fold induction and EC50 determination for rifampicin based on of relative CYP23A4 mRNA expression measured from samples of 3 donors (S1356T, S1371T and S1552T), illustrating the need for including multiple donors for induction potential assessment.