Cytochrome P450 (CYP450) inhibition has been implicated in a majority of reported clinically relevant DDIs. CYP450 enzymes are grouped into 18 families based on their sequence similarity. Only a few of these enzymes, belonging to the 1, 2, and 3 CYP-families, are responsible for the metabolism of the majority of drugs and other xenobiotics. Therefore, regulatory agencies globally recommend in vitro evaluation of an investigational drug’s potential to inhibit the following specific CYP450 enzymes[1]

P450 enzymes can be inhibited either via direct inhibition or time-dependent inhibition (TDI)[2]):

For TDI there are two major mechanisms by which the phenomenon is observed. The most important and common one being TDI by mechanism-based inhibition (MBI) and the rarer and less impactful TDI by reversible inhibition via a metabolite.

Given the meaningful difference between the types of inhibition and their possible clinical impact, it is important to study inhibition of CYP450 enzymes in an assay setup that allows us to understand whether the compound is a reversible or a time-dependent inhibitor, and in case of a time-dependent inhibitor, can also help understanding if MBI or reversible TDI occurs.

Did you know…?
TDI by MBI, as explained in the main text, occurs usually when a drug is a mechanism-based inhibitor of the affected enzymes(s). It can however also happen that a metabolite of a drug is causing a mechanism-based inhibition on a different enzyme. One such example is gemfibrozil, of which the glucuronide (formed by UDP-glucuronosyltransferases (UGTs)) is a MBI of CYP2C9.

Inhibition of CYP450 activity is most frequently examined in human liver microsomal preparations using specific probe substrates for all major metabolizing CYPs. Cocktail approaches, also known as ‘N-in-One’ assays, have been developed to test for inhibition of several P450 isoforms simultaneously.[4] Known selective time-dependent and non-time dependent inhibitors at one concentration are commonly included as positive controls for inhibition.

A test compound is typically studied at least over a 1000-fold concentration range. The compound is pre-incubated with human liver microsomes (HLM) for 30 minutes with and without NADPH. Following pre-incubation, NADPH and the CYP-specific substrate or substrate cocktail (for ‘N-in-One’ type assay) are added to initiate the reaction, and then a second incubation takes place. Optionally, a parallel incubation of the compound without preincubation can be added. Wells are assayed for metabolites specific to single CYP enzymes, as outlined in Table 1. According to FDA recommendations, applying the substrates at approximate Km concentrations allows the use of half of measured IC50 values an estimate of Ki based on the Cheng-Prusoff equation[5]:

Did you know…?
Numerous physiochemical and biological factors have an impact on in vitro drug-drug interaction determinations. First of all, the choice of biological matrix determines the applicability and the limits of the system, while each has their drawbacks and advantages. Recombinant CYP enzymes are the most common choice, due to their specificity and relatively easy handling. Microsomes contain a more complete complement of hepatic drug metabolizing enzymes when compared to recombinant enzymes and thus is a more physiologically relevant system. Hepatocytes represent a higher level of complexity and therefore should be the most representative of in vivo processes. However, using a more complex model also means additional sources of variation, such as drug accumulation inside the cells, transporter activity, choice of preparation protocols. Furthermore, hepatocytes are more costly and their supply is limited. 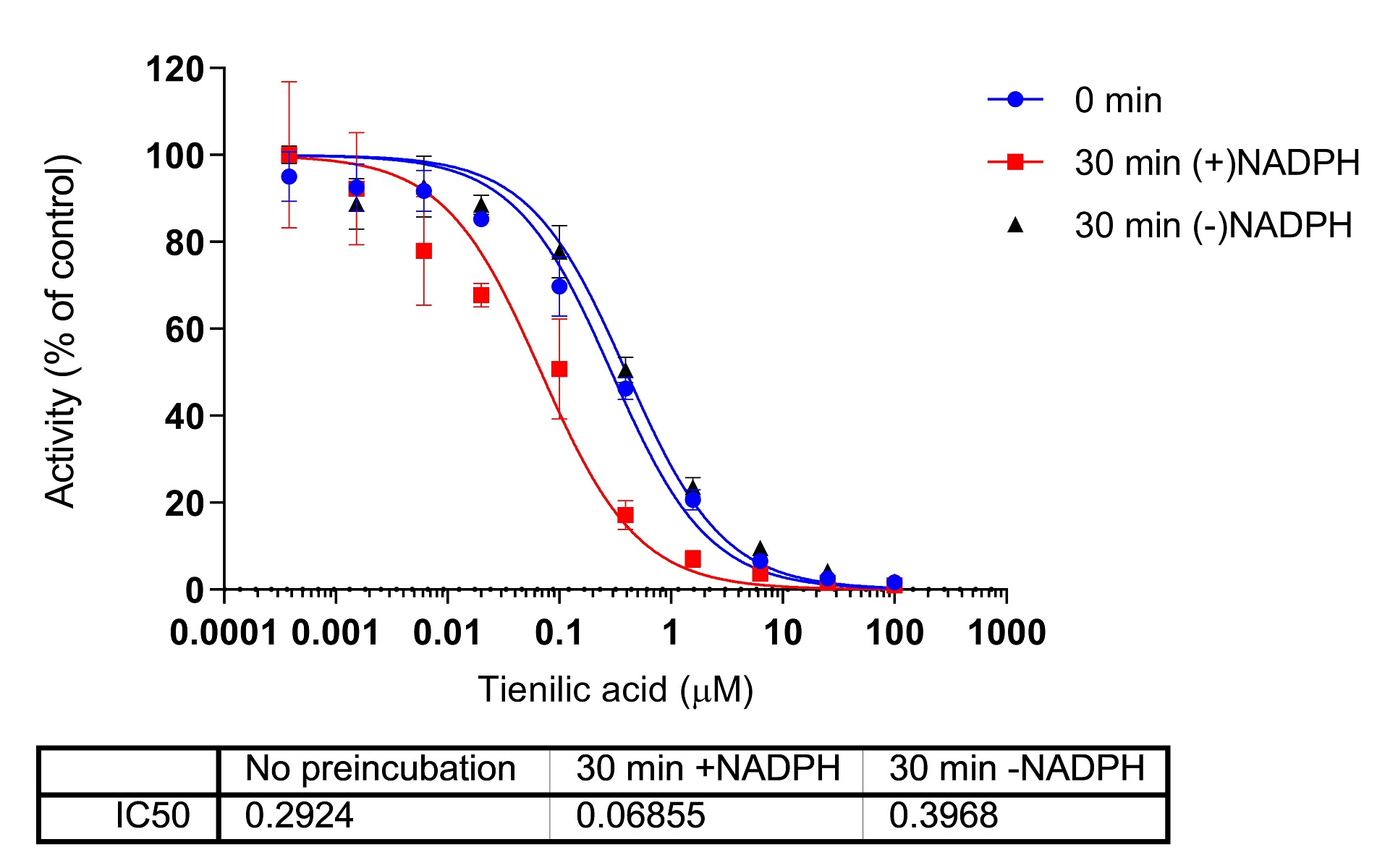 Figure 1 – Inhibition of CYP2C9-mediated diclofenac-4’-hydroxilation by tienilic acid. Sulfaphenazole was pre-incubated with human liver microsomes (0.1 mg/ml) at 37 °C with or without NADPH for 30 minutes, followed by 10 minutes incubation by addition of diclofenac (5 µM) and NADPH (1 mM).

To estimate the potential DDI risk due to time-dependent inhibition, the apparent inactivation constant (KI) and the maximal inactivation rate constant (Kinact) are determined using multiple concentrations and pre-incubation times. [6]

The assay starts with pre-incubating the test article at multiple concentrations (plus a vehicle control) selected to achieve a scale from no inactivation to maximal inactivation, for different pre-incubation times (including 0 min) with human liver microsomes and NADPH. Following the pre-incubation, an aliquot of the pre-incubation is diluted 10-fold with buffer containing NADPH and the CYP isoform-specific substrate, and then a second incubation is conducted to allow formation of metabolites of the marker substrate. The dilution step and applying the substrates at concentrations 5-10-fold higher than the Km helps to minimize the rate of direct inhibition. The reaction is quenched, samples are centrifuged, and supernatant is collected for analyses.

Following expression of the obtained data of the LC/MS measurements as % remaining activity of the vehicle control, the natural logarithm (ln) % of the remaining CYP450 activities are plotted against the time of preincubation. Then Kinact and KI are calculated by a non-linear regression analysis of the negative slopes against inhibitor concentration according to the following equation:

where kobs represents the inactivation rate for a given concentration of the test compound in the preincubation mixture and is calculated from the negative slope of the natural logarithm of the % activity remaining after incubation of the inhibitor as a function of preincubation time, kinact is the maximal inactivation rate when [ I ] reaches infinity and KI is the inhibitor concentration for which kobs = 0.5 x kinact.