In agriculture a variety of chemicals like herbicides, fungicides, safeners, veterinary drugs and insecticides is still widely used. Billions of pounds of pesticides are used on a yearly basis (US EPA, 2007). Due to their extensive usage humans are regularly exposed to these types of chemicals through contaminated food or during application. Continuous research is being done on the risks of human pesticide exposure.

Interaction of pesticides with ABC transporters has been described in several cases (reviewed in Leslie et al, 2005). One of the most well known and striking examples is ivermectin, a potent antiparasitic drug, which interacts with the ABC transporter MDR1 (P-gp). Schinkel et al. (1994) discovered, by serendipity, how mdr1a knock-out mice were a 50-100 times more sensitive to ivermectin than wild-type mice. Whereas plasma levels of ivermectin in mdr1a knock-out mice were 3 times higher than in wild-type mice, brain levels were 90 times higher, demonstrating that Mdr1a prevents ivermectin from penetrating the blood-brain-barrier. Lespine et al (2006), in cooperation with SOLVO Biotechnology, studied the interaction of ivermectin with human MDR1 but also MRP1, MRP2 and MRP3 with a number of in vitro methods. Apart from human MDR1 also human MRP1 was shown to interact with ivermectin. Ivermectin inhibited calcein-AM efflux in HL60-MRP1 cells (Fig. 1). Furthermore, an increased accumulation of BODIPY-Ivermectin was observed in HL60-MRP1 cells in the presence of MK571 or ivermectin, suggesting that ivermectin is a substrate of MRP1 (Fig. 2).

Figure 1: Inhibition of Calcein AM efflux in HL60-MRP1 cells by ivermectin and MK571.

Chloroacetanilide herbicides are among the most commonly used herbices in the world. In 2003 almost 14 million pounds of chloroacetanilides were used in the EU, which is 8% of total usage (Eurostat, 2007). Several of these herbicides, like alachlor, acetochlor, metolachlor and propachlor have been reported to be carcinogenic (Dearfield et al.1999). Recently, we studied the interaction of a number of chloroacetanilides and their metabolites (see Fig. 3, Table 1) with human ABC transporters (Oosterhuis et al, 2008). Parental compounds were studied for interaction with MDR1, MRP1, MRP2 and BCRP. The metabolites were also studied for interaction with MRP3.

Figure 3: Basic structure of chloroacetanilides The study showed that 4 out of 7 tested chloroacetanilides interacted specifically with MDR1. No interactions of any of the parental compounds was observed with any of the other transporters. Interaction was detected in both the ATPase and Calcein assay (figure 4 a,b). Acetochlor, alachlor, metazachlor and metolachlor stimulated MDR1 ATPase activity at concentrations between 1 and 1000 mM. The stimulation of ATPase activity indicates that these compounds are substrates of MDR1. Further studies revealed that these compounds also inhibit Calcein AM efflux in K562-MDR cells (Fig. 4 b,c) and sensitize them to the cytostatic agent Paclitaxel. Also inhibition of digoxin transport on Caco-2 monolayers was observed. These results demonstrate that chloroacetanilides are substrates of MDR1 that potently inhibit the transport of other substrates. Through inhibition of MDR1, chloroacetanilides might thus modulate drug absorption and sensitize cells to cytostatic agents. 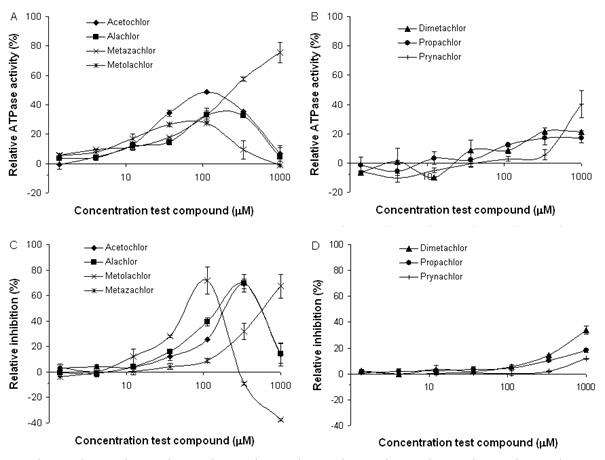 Figure 4: A,B) Relative ATPase activity in MDR1 expressing Sf9 membrane preparations, compared to a positive control (40 mM Verapamil). C,D) Cellular accumulation of calcein in K562-MDR cells. Results are shown as relative inhibition of Calcein-AM efflux, compared to a reference inhibitor (60 mM Verapamil). Among the metabolites, the glutathione conjugate of the acetochlor metabolite 2-chloro-N-(2-methyl-6-ethylphenyl) acetamide, was demonstrated to be transported by MRP1 (Fig. 5). After absorption, chloroacetanilides can either be bioactivated or detoxified and excreted. Bioactivation of chloroacetanilides is considered to be caused by the formation of reactive dialkylbenzoquinone imines (Jefferies et al., 1998). In the case of acetochlor this is 2-methyl-6-ethylbenzoquinonimine. A critical step in the formation of 2-methyl-6-ethyl-benzoquinonimine is the formation of 2-chloro-N-(2-methyl-6-ethylphenyl)acetamide by cytochrome P450s (Jefferies et al., 1998). The fact that this compound is a substrate of MRP1, suggest an important role for this transporter in detoxification of acetochlor in human. A possible detoxification pathway of acetochlor could be the deethoxymethylation by cytochrome P450s followed by conjugation to glutathione, mediated by glutathione transferases and finally the extrusion of the conjugate by MRP1 (Fig. 6). 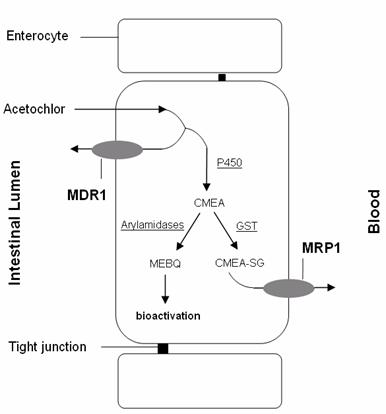 Agrochemicals are still widely used all over the world. Due to their extensive usage, humans are regularly exposed through contaminated food or directly, when using them in agriculture. ABC transporters interact with structurally diverse agrochemicals and can have striking effects on their bioavailability and toxicity. Simple in vitro methods can be used to effectively screen for interactions of agrochemicals with transporters and perform risk characterization studies.