P-gp (MDR1, ABCB1), a member of the ATP-binding cassette proteins, is the most important efflux transporter at the blood-brain barrier (BBB). Testing of P-gp mediated brain penetration and drug-drug interactions at the BBB is important to assess the toxic or therapeutic potential of drugs.The correlation between in vitro and in vivo data is often not satisfactory (Garberg et al., 2005) , therefore it is essential to employ in vivo tests along with in vitro assays.

The aim of our recent study (Sziráki et al, 2011) was to set up an integrated in vitro – in vivo test system for assessing P-gp related drug-drug interactions. We provided evidence that quinidine is a good probe substrate to study P-gp function at the BBB since it works well in in vitro assays  with different complexity (membrane-based assays and monolayers), and also in vivo in microdialysis studies in rats and mice. Even more importantly our results show that quinidine and PSC-833 can serve as an excellent P-gp-specific probe substrate/inhibitor combination applicable to several assay systems both in vitro and in vivo.

Investigation of the barrier function of P-gp at the BBB requires a variety of in vitro and in vivo methods preferably using the same probe substrate and inhibitor. Digoxin (DGX) has been recommended as a probe substrate by the regulatory agencies (Zhang et al., 2009, Giacomini et al., 2010). Quinidine (QND) is also considered as a P-gp specific substrate (Kusuhara et al., 1997, Ma et al., 2010,). Monolayer efflux studies using MDR1-MDCKII have yielded negative results with some highly permeable compounds such as verapamil, ketoconazole and itraconazole (Polli et al., 2001). Yet, the distribution of these compounds across the BBB is controlled by P-gp in various animal models (Ishiwata et al., 2007, von Moltke, et al., 2004, Miyama et al., 1998) and also in humans (Sasongko et al., 2005).

We aimed to set up a validated and integrated assay system, and to provide further evidence that QND can be used as a probe substrate of P-gp at the BBB. A further objective of our study was to investigate interactions of QND and PSC-833 (a clinically relevant P-gp inhibitor) to determine if they can serve as a reference probe substrate/inhibitor combination in assessing investigational drugs for their interactions with P-gp at the BBB in vitro and in vivo. The assay system consisted of in vitro and in vivo elements: (i) ATPase assay, (ii) MDCKII-MDR1 monolayer assay, (iii) primary rat brain endothelial cell (RBEC) monolayer assay and (iv) dual- and triple-probe microdialysis studies in anesthetized and awake rats. 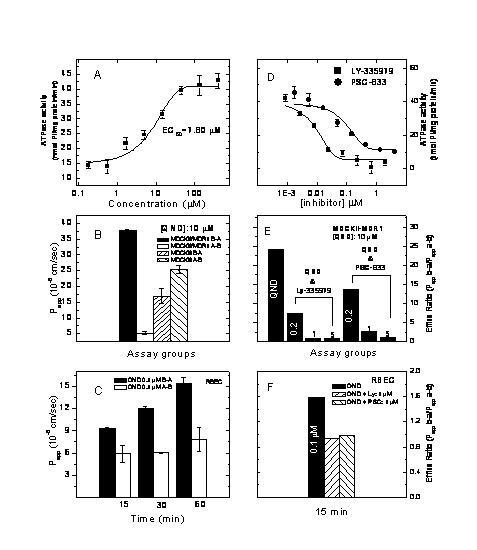 Figure 1. Interaction of quinidine with P-gp in vitro. Activation of vanadate sensitive P-gp ATPase by QND (A) and its modulation by P-gp inhibitors (PSC-833 and LY-335979) (D). Vectorial transport of QND in monolayers from human MDR1 expressing MDCKII and parental  cells (panel B) and its modulation by the inhibitors (E).  Vectorial transport of QND in primary RBEC monolayer (C) and its inhibition by PSC-833 and LY-335979 at 15 min incubation (F).

In MDCKII-MDR1 monolayers expressing human MDR1, QND showed appropriate efflux ratio (ER>2). The vectorial transport of QND was inhibited by PSC-833 and by Ly-335979 (Fig 1B, E).
Brain endothelial cell monolayer assays were carried out using primary cells isolated from both rat and mouse. In RBEC monolayer assay a 1.5- to 2.0-fold efflux ratio was found for QND transcellular transport depending on the length of incubation time (15, 30, 60 min). Vectorial transport of QND was inhibited by PSC-833 and Ly-335979 with similar potency (Fig 1 C, F).  Similar results were gained with MBEC (data not shown). In RBEC using digoxin  a reasonable efflux ratio was observed only at 15 min incubation while it was decreased at later time points (data not shown).

Microdialysis technique is the gold standard for assessing the concentration of pharmacologically active, free form of compounds in the target tissue. In anesthetized rats QND was administered intravenously and its unbound levels were determined in brain and blood by dual-probe microdialysis. The AUC (area under the curve) of QND was calculated in brain and blood dialysate samples and the AUCbrain/AUCblood ratio was determined. In control animals the ratio was about 0.3 (Fig.2 Panel A and B), while after i.v. administration of PSC-833 the brain to blood ratio increased to appr. 1.0 (Fig.2 Panel C). Similar results were observed in mouse microdialysis experiments (data not shown). 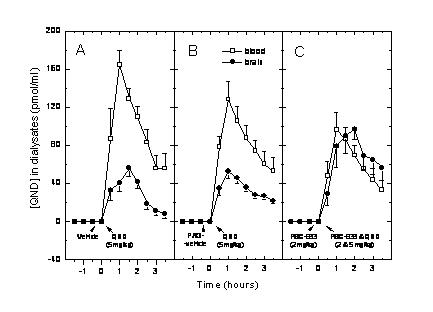