Effects of flavonoids on P-Glycoprotein activity

About 30% of the drugs are of plant origin. Over the past few years there has been an exponential growth in the number of reports describing the effects of nutritional modulation on aging and age-related diseases. Specific attention has been directed toward the beneficial effects afforded by dietary antioxidants, in particular those from fruit and vegetables, in ameliorating age-related deficits in brain performance. There is considerable evidence that supports the notion that free radical generation may act as a catalyst for development of the neuropathology that underlies cognitive aging. 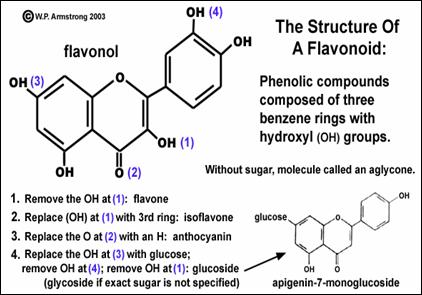 Fig. 1. The structure of a Flavonoid

The central nervous system (CNS) has a high rate of oxidative metabolism relative to other tissues, receiving almost 15% of the cardiac output and accounting for up to 30% of the resting metabolic rate. There is no wonder that the CNS exhibits increased vulnerability with age from the cumulative effects of oxidative damage to proteins, lipids and nucleotides. A growing number of studies have found beneficial cognitive effects from counteracting oxidative stress by dietary intervention with antioxidants. The flavonoids are a large family of plant-derived secondary metabolites with an amazing array of different biological functions. Among these, the antioxidant activity is best understood and various studies on structure-function relationships have been performed. Only recently have studies been performed that focus on the potential for flavonoids to mediate neuroprotection. The flavonoid epigallocatechin gallate, a polar polyphenol predominantly found in tea and to a lesser degree in wine, has been reported to enter the brain after oral administration.

A recent study has examined the permeability of flavonoids and their known circulating metabolites across an in vitro model of the Blood-Brain Barrier (BBB). In comparison with the permeability of sucrose, hesperetin and naringenin permeabilites were greater, indicating significant transcellular flux, in agreement with their high lipophilicity. By contrast, the permeabilities of the anthocyanins and the glucuronide conjugates of herperetin and naringenin were moderate, suggesting some flux of these compounds via paracellular diffusion. While the in vitro models provide a useful screening tool for assessing and ranking passive permeability of compounds across the BBB, they, however, do not fully mimic the physiological environment, in particular the role of efflux transporters, which control xenobiotic flux across the BBB.

An efflux transporter of particular importance, the P-gp, a product of the multidrug-resistant mdr1 gene, has received the greatest attention with its function at the BBB. P-gp is an ATP dependent efflux pump responsible for cross-resistance of human cancers to a variety of lipophilic compounds and is composed of two homologous halves, each containing six transmembrane domains and ATP-binding/utilization domains. It is expressed on the luminal cell membrane and is able to transport a diverse array of structurally unrelated substrates out of these cells. P-gp behaves in fact as a vacuum cleaner with little selectivity toward transported substrates, and lowers the concentration of anticancer drugs below their cytotoxic threshold. In order to examine the potential influence of the efflux transporter P-gp in limiting the entry of flavonoids into the CNS, uptake studies were performed after pre-administration of P-gp inhibitors. In some cases, the Kin(uptake rate) values after preadministration of P-gp inhibitors were increased. In each case, the Kin values after pre-administration of the P-gp inhibitors were lower than that of iodoantipyrine, which has a comparable log P (octanol/water partition coefficient), which is likely to be the result of partial P-gp inhibition. Just because it is in the blood, does not mean it is in the brain! In this regard, recent studies have found that flavonoids from particular families are able to permeate the BBB, whereas the entry of others is limited by the action of efflux transporters expressed at the endothelium surface. However, it should be noted that penetration of the BBB does not necessarily equate to entry into neurons, where flavonoids are believed to elicit their neuroprotective effects.

A French group of researchers has recently shown that P-glycoprotein flavonoid-binding sites are cytosolic, by using recombinant purified proteins corresponding to nucleotide-binding domains. In addition to binding ATP, the cytosolic domains also contain targets for modulators like steroids. The direct binding of a series of flavonoids to purified C-terminal domain was monitored by quenching of protein intrinsic fluorescence, and analyzed after correction for inner-filter effect. Flavonoid binding was prevented by preincubation with ATP. The presence of hydrophobic substituents, such as methoxy groups, also increased the affinity indicating that other interactions are involved. The chemical synthesis of more hydrophobic, prenylated, flavonoids was therefore undertaken to further characterize the modulator-binding site. Preliminary results indicated that flavonoid prenylation strongly increased binding affinity. Prenylated flavonoids therefore constitute promising high-affinity compounds which could be used to inhibit P-gp activity and therefore to specifically revert cellular multidrug resistance to anticancer chemotherapy.

Quercetin is a flavanoid that serves as the backbone for many other flavonoids. It is consistently the most active of the flavonoids in experimental studies, and many medicinal plants owe much of their activity to their high quercetin content. Quercetin is a dietary polyphenolic compound with potentially beneficial effects on health. Claims that quercetin has biological effects are based mainly on in vitro studies with quercetin aglycone. Studies have been conducted to assess the long term tissue distribution of quercetin. According to these studies, quercetin and quercetin metabolites were widely distributed in rat tissues, with the highest concentrations in lungs and the lowest in brain, white fat and spleen. In the short-term pig study, liver and kidney contained high concentrations of quercetin and quercetin metabolites, whereas brain, heart, and spleen had low concentrations. These studies have for the first time identified target tissues of quercetin. Moreover, a study conducted by a group of UK researchers has shown that in vitro hepatic cells can absorb and turnover quercetin glucuronides and that human endogenous beta-glucuronidase activity could modulate the intracellular biological activities of dietary antioxidant flavonoids. It has also been shown that the intestinal absorption of the flavonoid quercetin in rats is limited by the secretion of glucuronidated metabolites back into the gut lumen. A study conducted by Dutch researchers has shown that the Breast Cancer Resistance Protein (Bcrp1/Abcg2) limits net intestinal absorption of quercetin by pumping quercetin glucuronides back into the lumen. Another flavonoid, the Epicatechnin-3-gallate, one of the flavonoids in green tea, has been demonstrated to have cancer-preventive properties in many model systems. The observations of a study conducted by American Researchers demonstrated important roles of membrane transporters, i.e., MonoCarboxylate Transporter (MCT), Multidrug Resistant Protein 2 (MRP 2), P-glycoprotein and MRP1, in the cellular accumulation and potential effects of Epicatechin gallate. In another study, MRP2 has also shown to have a potential role in the transport of a flavonoid glycoside, the genistein-7-glucoside by human intestinal CACO-2 cells. But also flavonoid-like molecules have shown interactions with the Membrane Transporters. A study conducted by an American team demonstrated that Phloridzin, a glucoside of the flavonoid-like polyphenol phloretin, is transported by the sodium-dependent glucose transporter SGLT1. In addition, this group also showed that this and other flavonoid glycosides unexpectedly are efficiently effluxed by both MRP1 and MRP2. SOLVO has also conducted studies with the aim to determine the interaction of selected flavonoid glucuronide compounds with the human MRP2 transporter. All tested compounds showed interaction with the MRP2 transporter. The various mechanisms of flavonoid-membrane transporter interactions can be very important in determining the ADME properties of a large number of compounds. SOLVO is currently conducting research in this field that will increase our understanding of these complex mechanisms. In our experience, MRP2 ATPase assays are effective tools for the study of flavonoid-ABC transporter interactions.