P-gp (MDR1, ABCB1) has a crucial physiological function in major barriers in the body, namely the protection of cells and organs against toxic compounds and metabolites. It plays major role in tumor cells as well. Due to its high transport capacity and broad substrate recognition, this transporter can confer a multidrug resistance phenotype to cancer cells. The multidrug resistance phenotype in tumors is associated with the overexpression of certain ABC transporters, termed MDR (multi drug resistance) proteins (Kwak et al., 2009). Processes of the cell cycle are regulated by cyclins and cyclin dependent kinases (CDK). The amount of kinases is constant during the cell cycle, unlike their activity which is regulated by cyclins. CyclinD/CDK4 or 6, CyclinE/CDK2, CyclinA/CDK2 and CyclinB/CDK1 complexes control the smooth progression of the cycle. A disregulation of the cell cycle components may lead to tumor formation. Seliciclib is a 2,6,9 trisubstituted purine analogue structured second-generation CDK inhibitor molecule (Meijer et al., 2006). It arrests cellular proliferation and induces apoptosis through molecular interactions with the heterodimers of CDKs and cyclins. It is a potent inhibitor of the human CyclinE/CDK2, CyclinB/CDK1, CyclinH/CDK7, and CyclinT1/CDK9 (Meijer et al., 2006; Okyar and Lévi, 2008).

Seliciclib can block kinase activity via binding to the ATP binding site of the respective kinases in a competitive fashion (De Azevedo et al., 1997). Seliciclib has displayed activity against human non–small cell lung, colon, breast, and prostate cancer cell lines in xenografted mouse models as well as against mouse Glasgow osteosarcoma (Iurisci et al., 2006; Meijer et al., 2006). Phase I and II clinical trials have shown adequate drug tolerability (Benson et al., 2007, Le Tourneau et al., 2010) and have recently revealed high activity in patients with chronic lymphocytic leukemia or nasopharyngeal carcinoma (Weingrill et al., 2007; Hsieh et al., 2009). However limited information exists on the resistance of cancer cells to seliciclib. Although seliciclib has been shown to inhibit P-gp-mediated transport of rhodamine 123 (Bachmeier and Miller, 2005), the nature of the seliciclib-P-gp interaction, namely substrate or inhibitor, is unknown as yet. The potential role of the multi-drug resistance transporter, P-gp in seliciclib resistance has not been evaluated either. A further indication of the possible role of P-gp in seliciclib transport stems from the observation of its limited brain uptake, which was estimated to be 25% in adult rats (Vita et al., 2005). Our data clearly show that seliciclib is a selective substrate of P-gp. It activates the P-gp ATPase (Fig. 1A), and shows an P-gp-dependent vectorial transport in MDCKII-MDR1 cells (Fig. 2, A and B). A vesicular transport assay using NMQ as a probe and a Calcein assay were performed to confirm interactions with P-gp transporter. Both assays showed interaction (Fig. 3, A and B). 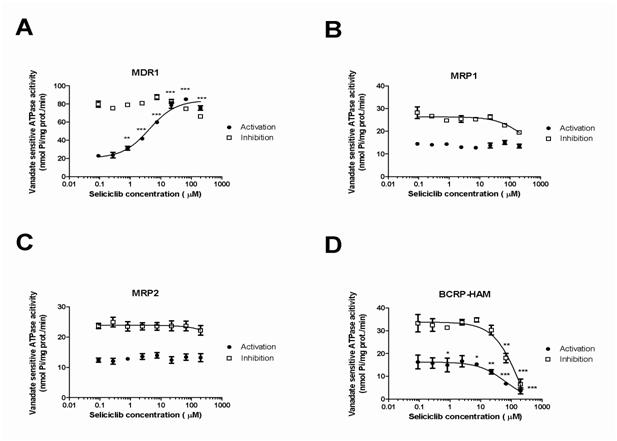 Figure 2. Vectorial transport of seliciclib in monolayer efflux assays using MDCKII-MDR1 cells (A and B). Seliciclib also interacts with BCRP (ABCG2) in the ATPase assay (Fig. 1D). BCRP inhibition by seliciclib was also confirmed in a Hoechst assay (Fig. 3C). The interaction does not result in the activation of the ATPase; therefore, seliciclib is a likely inhibitor of the BCRP transporter. The observed IC50 values correlate with the low affinity observed for inhibition of BCRP-mediated hematoporphyrin transport (An et al., 2009). The clinical free drug concentrations under current schedules are way below the IC50 values for seliciclib-mediated BCRP inhibition, rendering this interaction as unlikely to be clinically relevant.

Figure 3. Inhibition of calcein AM efflux from K562-MDR1 cells (A), ATP-dependent N-methylquinidine (NMQ) transport into MDR1-M inside-out vesicles (B), and Hoechst 33342 dye efflux from PLB985-BCRP cell by seliciclib (C). P-gp is also responsible for multidrug resistance to substrate drugs (Szakács et al., 2004). However, we have not observed P-gp-mediated resistance to seliciclib-induced cell killing using three different cell lines: K562-MDR1, HL60-MDR1, and MDCKII-MDR1, These cell lines usually display significant P-gp-dependent resistance to other substrate drugs. Seliciclib is a moderate to high passive permeability compound based on the permeability data of approximately 5x10-5 cm/s (Fig. 2B). It has high bioavailability (Benson et al., 2007), log P value of 3.244 (Meijer et al., 2006), and a reasonable correlation between the IC50 values could be determined using membrane preparations or MDR1-expressing living cells (35.5 μM versus 11.5 μM). Therefore, the lack of a protective effect of P-gp against cell death inflicted by seliciclib may simply be explained by the passive permeability of the drug. Seliciclib displayed greater cytotoxicity in MCF7-MDR1 than in the parental MCF7 line (Cappellini et al., 2009). This class of compounds has been termed MDR1-inverse because P-gp sensitizes cells to cytotoxicity by these compounds (Szakács et al., 2004). Thus, P-gp may play a dual role in HL60-MDR1, K562-MDR1, and MDCKII-MDR1 cells by reducing intracellular drug concentration and at the same time sensitizing cells to seliciclib. The two opposing effects may effectively extinguish each other in the cell lines used in this study. This is, thus, an alternative explanation to the lack of resistance.

Table 1. Summarizing EC50 and IC50 results measured in different assay types Pharmacokinetic studies have shown high oral bioavailability, but limited brain exposure to seliciclib. Our studies show that seliciclib is indeed a high-affinity substrate of P-gp, since it activates the ATPase activity of the transporter and shows vectorial transport in MDCKII-MDR1 cells. This interaction may be behind the drug’s limited penetration through the blood-brain barrier. P-gp overexpression, on the other hand, does not confer resistance to the drug in the cellular models tested, making the drug a favorable candidate to treat P-gp transporter-overexpressing tumors. In conclusion, these findings should be considered when treatment strategies using seliciclib are designed.