Development of resistance to multiple drugs is a major problem in the treatment of cancer cells and infections by pathogenic microorganisms. One of the mechanisms by which human cells and bacteria can acquire multidrug resistance involves the expression of ABC transporters which mediate the active extrusion of drugs from the cell. Unlike neoplastic and infectious diseases, chronic inflammatory diseases have received little attention. The potential role of ABC transporters in determining the efficacy of anti-rheumatic drugs in patients with rheumatoid arthritis is unclear.

Rheumatoid arthritis (RA) is an autoimmune disease which causes chronic inflammation of the joints, the tissue around the joints, as well as other organs in the body. There are several treatment options available, which include non-steroidal anti-inflammatory drugs (NSAIDs), corticosteroids, disease modifying anti-rheumatic drugs (DMARDs) and biologics given alone as monotherapy or in a variety of combinations. Recent evidence has shown that early treatment is important in reducing the rate of progression of erosions and decreasing disability. One of the drawbacks is that while NSAIDs and corticosteroids have a short onset of action, DMARDs can take several weeks or months to display clinical effect.

Moreover, due to the long-term application of the drugs many RA patients demonstrate loss of efficacy over time. DMARDs resistance may be a multifactorial event including enhanced drug efflux via ABC transporters, impaired drug uptake and drug activation, enhanced drug detoxification etc. A number of studies indicate that several ABC transporters may have a role in drug resistance to DMARDs. Two independent studies revealed that MDR1 (ABCB1, P-gp) expression was higher in the peripheral blood lymphocytes of prednisolone and DMARD-treated patients than in controls [1,2]. Llorente and colleagues observed a difference in the expression of MDR1 among patients who did not respond to therapy and those patients who did [3]. Others found MRP1 (ABCC1) overexpression in chloroquine resistant human CEM T cells [4]. When human T lymphocytes were selected in the presence of sulfasalazine, the resistant population overexpressed BCRP (ABCG2, MXR) and displayed lower sensitivity to leflunomide too [5]. Our results also demonstrate that leflunomide and its metabolite are high affinity substrates of BCRP [6]. Both sulfasalazine and leflunomide activated the BCRP transporter in the ATPase assay, both proved to be competitive inhibitors of methotrexate transport by BCRP, and their cytotoxic effects could be reversed in the presence of the BCRP-specific inhibitor Ko134. Leflunomide suppresses immune cells by inhibiting dihydroorotate dehydrogenase, an enzyme that is necessary for the production of DNA and RNA.

This isoxazole derivative is metabolized to its active form, A771726. Leflunomide is a commonly used new DMARD applied in monotherapy or in combination therapy with NSAIDs. Several studies have confirmed that the administration of leflunomide with methotrexate can lead to an improvement in the patient’s condition [7]. This may be due, at least in part, to the BCRP-related competitive inhibition between methotrexate and leflunomide or A771726, leading to increased local concentrations of one or other drug. In a recent publication by van der Heijden et al, the expression level of efflux transporters responsible for multidrug resistance was characterized on immune effector cells in synovial tissue from patients with rheumatoid arthritis before and after a 4-month treatment with methotrexate and leflunomide [8]. Based on immunohistochemical detection MRP1 and BCRP are expressed on RA synovial tissue macrophages in the intimal lining layer and the synovial sublining and on endothelial cells. BCRP expression was significantly higher in the RA patients synovial tissue than in controls before the treatment (Fig. 1.). These observations suggest that the induction of the BCRP expression on synovial macrophages differ from that in cancer cells which is usually therapy-induced. In the case of RA it seems to be more inflammatory induced. 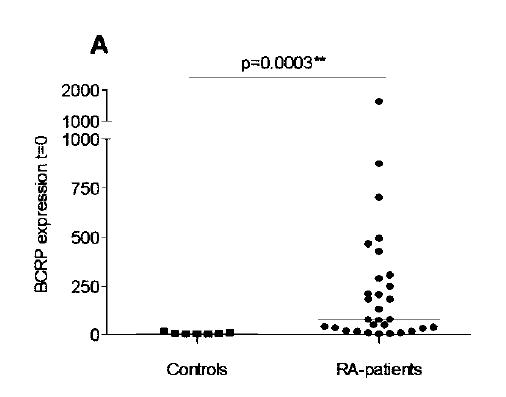 Figure 1. BCRP expression in the sublining layer in controls and patients with RA. The authors observed statistically significant association between BCRP expression in the synovial sublining and clinical response to methotrexate and leflunomide therapy. After a 4-month treatment the median number of the BCRP positive cells was 3-fold higher in patients who did not respond to treatment than in those who did (Fig. 2.).

Figure 2. BCRP expression in RA synovial biopsy specimens from responders and nonresponders to 4 months of treatment with methotrexate or leflunomide, determined by the Disease Activity Score in 28 joints. In conclusion, BCRP may play a role in the efficacy of different DMARDs during RA therapy.