Introduction to BCS and its application

The oral bioavailability of a small molecule drug depends on the rate and extent of its absorption. These, in turn, are determined by drug properties such as solubility, permeability and formulation (i.e., presence of excipients or nano formulation). Determination of in vitro solubility and permeability is a good basis for predicting and understanding in vivo absorption, by the classification of a drug into 4 different classes of the Biopharmaceutics Classification System (BCS) [1]:

Potential practical applications of the BCS have been studied extensively over the past decades, and it was adopted by regulatory agencies globally as a guiding principle for developing specific test requirements for specific drug classes. The BCS system currently has two major applications in the regulatory environment:
- can be used to justify inclusion or omission of certain assays (e.g., efflux transporter substrate assessment assays) as part of drug approval processes [2], or
- as reference for granting a waiver of clinical bioequivalence studies (biowaiver) [3].

The most common application of the BCS classification is for demonstrating bioequivalence, meaning a new drug is proven to have the same characteristics as a previously registered compound. This determination can lead to waiving the need for clinical studies and hence is a cost and time saving approach in drug development. Beyond the BCS class determination approach, other methods also exist for demonstrating bioequivalence, however, these are more costly, and time-consuming, thus less widespread.

The assay setup for BCS class determination should, however, strictly adhere to the latest guidance and be run on a characterized Caco-2 assay in order to be used in biowaiver applications. The ICH M9 harmonized international guidance issued in May 2021 [3] describes globally accepted requirements, and has now replaced the previously independently existing FDA, EMA and WHO guidance documents for the same purpose.

SOLVO’s fully validated Caco-2 assay is suitable for the determination of the permeability class of a compound in line with the BCS classification system in full agreement with the ICH M9 criteria [3]. While in vitro assays are often used to predict in vivo permeability and bioavailability (fraction absorbed) of a compound, most systems, such as a PAMPA assay or non-validated Caco-2 systems only provide system-specific permeability values that are not reproducible across systems or correlated to in vivo, thus cannot be used for regulatory purposes.

Minoxidil was identified as the class boundary reference (Figure 1). In the permeability class determination assay, a test compound is tested in parallel with a selection of the previously characterized internal permeability standards, for which the results from each experiment needs to be within acceptance criteria to ensure data reliability. This experiment allows classification of the test compound along BCS criteria as either high- or low permeable based on direct comparison to the high-low permeability boundary cut-off compound, Minoxidil. 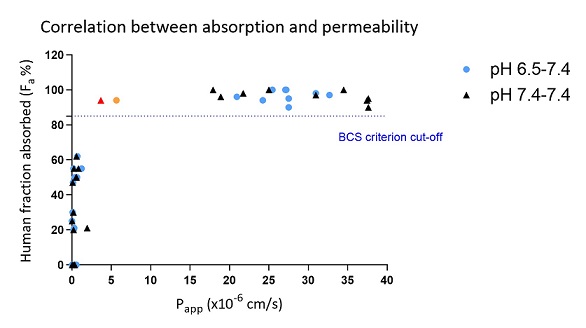 Figure 1 – Characterization of SOLVO’s Caco-2 assay with 28 reference compounds. Calculated Papp (A to B direction) at apical pH 6.5 and basolateral pH 7.4, or at apical pH 7.4 and basolateral pH 7.4 were plotted against human oral absorption data (Fa). BCS classification criterion for high permeability is shown as a dotted blue line. Orange triangle and red circle indicates minoxidil, which was chosen as a high permeability internal standard based on rank-order correlation.

SOLVO’s BCS Permeability classification package applies a stepwise approach, where test compound permeability is assessed in two separate experiments alongside an extensive selection of control experiments, as illustrated in Table 1.  Prior to this, a set of supporting assays is also conducted, such as solubility testing and compound tolerability assessment in the Caco-2 system, to assure the right conditions are selected for the definite permeability determination.

Compound properties beyond permeability may also affect further study outcome, therefore our set of preliminary assays included with the package aims to ascertain the permeability assays are run at optimal conditions, tailored to best fit each individual compound. Selected characteristics, such as limited aqueous solubility, non-specific binding to plastic or cells or cytotoxic effects at certain concentrations or incubation times, may not necessarily make a compound un-classifiable, however, if not characterized and considered early on, they can affect assay outcomes and potentially lead to inconclusive results. For example, in case a test article has toxic effects to the Caco-2 cells in the assay system, the monolayer integrity may be compromised and overall higher permeability for all markers would be detected, in which case, the data cannot be used for classification. Addressing this in an early stage allows for a simple fix by adjusting the concentration range for further experiments. Such effects are tested at both apical pH levels applied in the experiments (pH 6.5 and pH 7.4) as well as in the presence and absence of the co-tested reference compounds. This data, taken together with any system-specific solubility limitations, is used for selecting the most optimal assay parameters for subsequent measurements. This ensures that the data obtained from permeability tests is high-quality and strongly reliable and can also help avoid unnecessary-repeat experiments, and the associated elevated costs and delays in study timelines.

Information provided on transporter activity and functionality in the in vitro systems used is crucial and has been consistently highlighted in regulatory feedback to biowaiver submissions. Insufficient data is often cited as reason for rejection. Therefore, as part of our BCS Permeability classification study, a set of controls are applied to confirm efflux transporters are functional in the assay system: efflux of control substrates for BCRP, MDR1 and MRP2 are tested in parallel with the test compound assessment, in the presence and absence of a reference inhibitor.

To be suitable for BCS classification, both the test compound and the set of reference permeability standards used need to be mainly passively permeable and not substrates to active (efflux) transport (Efflux ratio (ER) < 2). This also further highlights the importance of bi-directional permeability assessment for all compounds and references in order to obtain an ER value. Compounds that do not fulfil this criterion are likely not classifiable by the standard BCS approach. SOLVO’s stepwise study construction allows for early confirmation of the test compound as non-substrate for active transport, and subsequent, more complex permeability tests can be confidently conducted, while in case efflux is observed, it is possible to re-consider the next steps before the core assays are conducted.

All activities are also conducted with our Regulatory level quality control applied (including archiving) as default to ascertain all regulatory requirements are met.

[5] EMA, GUIDELINE ON THE INVESTIGATION OF BIOEQUIVALENCE, London, 20 January 2010