In vitro Hepatocyte Uptake assays are predominantly used for evaluating the uptake of a Test Article (TA) into hepatocytes, both via active (through transporters) or passive (by diffusion) mechanisms. Hepatic clearance may be altered by drug interactions affecting drug metabolizing enzymes and membrane transporters. In addition, transporters can affect the tissue concentrations of drugs, including hepatic accumulation, and therefore affect their pharmacological and/or toxic effects, without necessarily affecting systemic exposure [1]. Clinically relevant drug-drug interactions (DDIs) leading to changes in systemic exposure of these drugs are primarily attributed to the inhibition of hepatic uptake transporters [2]. Therefore, transporter mediated DDIs have the potential to influence drug efficacy and toxicity.

SOLVO’s Hepatocyte Uptake assays use commercially available cryopreserved hepatocytes from human as well as several preclinical species (Rat, Mouse, Dog and Cynomolgus Monkey). The assay has been characterized for each species in our laboratories and data is available on prototypical substrates and inhibitors. A hepatocyte uptake assay format relying on measuring uptake in suspension hepatocytes that are centrifuged through a layer of oil to separate from incubation medium has historically been used in the field. As this so-called oil-spin method is a low throughput and technically challenging assay, alternatives have been developed spurred by availability of better quality plateable hepatocytes. Recently, the preferred approach is therefore using a plated assay format as it is more universally applicable than the previously more common oil-spin method. In addition to its easier adaptability to screen-like setups, the plated approach also showed significantly lower risk of carry-over due to drug non-specifically absorbing to the cell surface than observed in the oil-spin approach, yielding more reliable data outputs [3]. Plated cells can also be incubated for longer periods with cell-to-medium concentration ratios remaining relatively stable, allowing for hepatocyte-to-medium unbound concentration ratio (Kp,uu) determination [3]. The application of this approach is only limiting for highly hydrophilic compounds with low CLint (>3 μl/mg/min) and low intracellular binding, where the oil-spin method, that is still available at Solvo upon request, may be requested for such compounds. 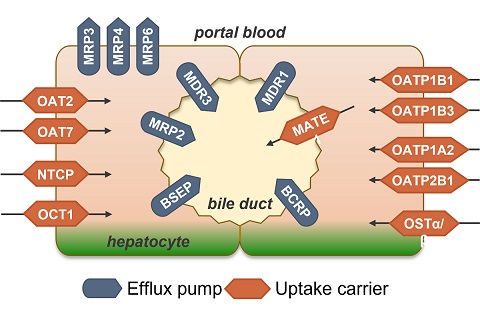 Figure 1. – Summary of the major ABC pumps and SLC uptake carriers expressed in the liver, including their primary placement in differentiated hepatocytes and the primary direction of transport.

Hepatocytes in vivo express a significant number of drug transporters both in their sinusoidal (basolateral) and bile duct-facing (apical) membranes [4-6], of this, sinusoidal transporter expression is largely maintained in cryopreserved hepatocytes used in plated (or suspension) formats. These transporters include, among others, Organic Anion Transporting Polypeptides OATP1B1 and OATP1B3, the Sodium/Bile-Acid Cotransporter NTCP, the Organic Cation Transporter OCT1 and the Organic Anion Transporter OAT2 which are commonly studied as mediators for DDI and/or hepatotoxicity. Application of specific transporter inhibitors in the Hepatocyte Uptake assay allows for the mechanistic investigation of the exact molecular mechanisms behind hepatic TA uptake and can inform pipeline de-risking, dose-adjustment measures or planning of future experiments for example. Such in vitro data on hepatic uptake and the underlying mechanisms can also be used to predict possible DDI risk and for PBPK modelling purposes where the system may for example be used for predicting hepatic clearance (Clint) as well as scaling factors, such as the relative activity factor (RAF) to be used for in vitro-in vivo extrapolation [7-8].

ADMETox properties of new drug entities are examined first in preclinical species to obtain preliminary data for safe and reliable dosage in clinical trials. Transporter-mediated hepatic uptake is often a determining step in systemic exposure and clearance of drugs. As expression, substrate specificity and kinetic parameters of hepatic uptake transporters are known to differ between species, especially in the case of OATPs, comparative characterization of the in vitro active and passive uptake clearance rates in hepatocytes from human versus preclinical species has outstanding importance for early drug development [9].

For projects in earlier stages of development, hepatic uptake is often tested in a screen-like format using cells from human and/or preclinical species to gather basic information on hepatic handling of multiple compounds or series, and differentiate between passive and active uptake processes, if any. In a later stage, a more complex assay setup, potentially also deploying transporter inhibitors can be applied for mechanistic investigation of hepatic uptake mechanisms, identification of any species-differences, and drive transporter selection for subsequent transporter-mediated in vitro DDI studies. For application in PBPK modelling, Hepatocyte Uptake data generation may also need to be adapted depending on the model used as well as compound behavior. SOLVO’s tailorable assay designs therefore allow for gathering the most meaningful in vitro hepatic uptake data for any project.

There are several approaches to determine hepatic uptake in vitro, however, the common principle involves separation of cells and media and monitoring of drug concentrations in either the cells or in both. In vitro uptake assays can be performed by using multiple formats: suspension (oil-spin method), plated hepatocytes and sandwich cultured hepatocytes. It has been demonstrated that the uptake rates (Km) as well as the IC50 values of selected probe substrates and inhibitors, respectively, were comparable across the three assay formats. Due to its easier handling and better adaptability for screening-like studies, SOLVO’s go-to approach to Hepatocyte Uptake assays is the plated format, while the oil-spin approach remains also available. Sandwich cultured hepatocytes represent a more complex assay system that allows investigation of both hepatic uptake and efflux and are run in custom setups using B-clear technology.

Transporter functionality in the hepatocytes is confirmed during the assay for OATP1B1, OATP1B3, NTCP, OCT1 and OAT2 (or their respective preclinical species orthologs) using a selection of thoroughly characterized probe substrates. Intracellular accumulation of the TA is compared between active transport condition and passive uptake only, and net transporter-mediated uptake is defined as the difference between passive and active rates. In both plated and suspension assay formats, passive transport can be determined by using low temperature (0-4°C) incubations, however this approach yields underestimated passive uptake clearance values, because membrane is sturdier and less permeable due to the low temperatures [10]. Chemical inhibition of active uptake has been shown to lead to better estimations of passive uptake, likely due to the inhibition of any residual uptake transport activity that may persist at 4°C, while it also allows assessment of transporter-mediated hepatic uptake without artificially introduced changes in membrane fluidity in the assay process. Therefore, by default, SOLVO’s Hepatocyte Uptake assay applies an inhibitor cocktail to obtain a passive transport condition, while the low-temperature control can be added upon request. Estimation of the impact of a specific transporter on the overall uptake process may be generated through comparison of the effect of a single transporter-specific inhibitor versus the complete inhibitor cocktail. In case hepatic enzyme-mediated metabolism is considerable for a test compound even over a few-minutes incubation time, inhibition of CYP enzyme activity (e.g., addition of 1-ABT and or other metabolizing enzyme inhibitors) in the assay system is also possible to ensure the uptake information obtained only reflects the effect of transport processes.

Major reference compounds for which characterization data is available include the following prototypical substrates and inhibitors:

The same probes and inhibitors are applied for human transporters and preclinical orthologs. In the Hepatocyte uptake assays, single or multiple probe substrates can be run along with a test article as positive control if available, and the use of multiple inhibitors may also be requested. 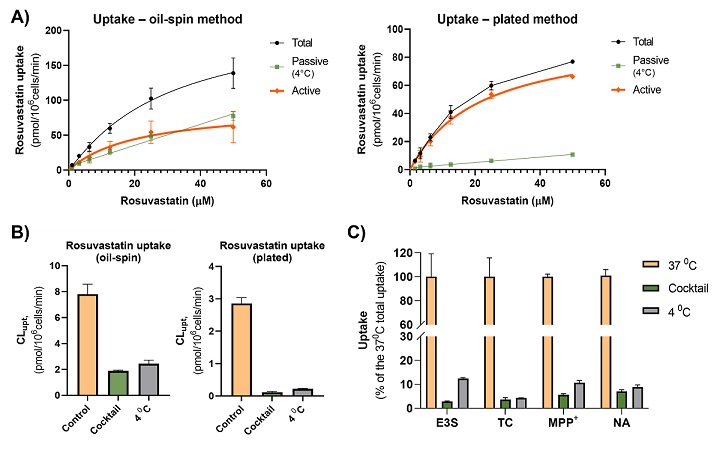 Figure 2. – A) Concentration-dependent accumulation of Rosuvastatin in hepatocytes compared between the oil-spin and the plated hepatocyte methods. Active transport is calculated as the difference of total and passive uptake, passive uptake was determined at 4 °C in this experiment B) Rosuvastatin uptake clearance rates calculated using the oil-spin and plated hepatocyte approaches and compared to rates obtained in the presence of the inhibitor cocktail or at 4 °C, respectively. C) Accumulation of hepatic uptake reference substrates Estrone-3-sulfate (E3S), Taurocholate (TC), MPP+ and nicotinic acid (NA) at 37 °C with no inhibitor cocktail, at 37 °C in the presence of an inhibitor cocktail and at 4 °C with no inhibitors added, respectively.

Buffer containing the Test Article (TA) (using single or multiple concentrations) is added to start uptake. After incubation (e.g., using 3-4 time-points), the solution is removed, and the plates are washed to remove non-accumulated TA from the wells. Hepatocytes are lysed, and intracellular TA accumulation in the cell lysate is determined using LC-MS analysis. In case of radiolabeled TAs (3H- or 14C-) readout by liquid scintillation counting (LSC) is also available, reference probe substrates are always quantified using LSC. Cell viability is always determined before the assay both for oil spin and plated methods, and in plated assay, protein content is also determined at the end of the experiment. Optionally, TA recovery in the assay may also be assessed. The Hepatocyte Uptake assay design is flexible and can be tailored to your project needs to for example determine kinetics or assess uptake in the presence of inhibitors. 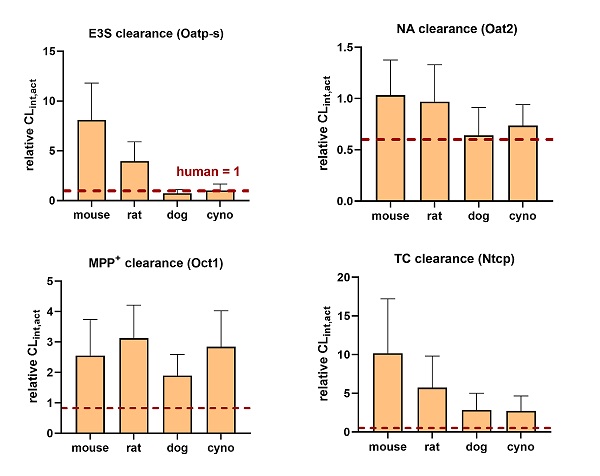 Figure 3. - Relative active clearance (CLint,active) values measured in plated hepatocyte cultures of preclinical species, compared to that in human hepatocytes with human CLint,act arbitrarily set to one (represented by a red dashed line on each graph). The respective probe substrates used were E3S – Estrone-3-sulfate for Oatp-s, NA – Nicotinic Acid for Oat2, MPP+ – 1-methyl-4-phenylpyridinium for OCT1 and TC – Taurocholate for Ntcp.

Human cryopreserved hepatocytes used for a study are typically pooled donor, mixed-gender hepatocytes to get a general experiment, however on request a specific lot with characteristics specific for project needs can be requested (e.g., single or multiple donors, gender, etc.). In case of preclinical species, it is generally thought to be less critical to use several donors as animals are homogeneous and kept under standard laboratory conditions.

Contact .(JavaScript must be enabled to view this email address) or submit a question if you are interested in our in vitro Hepatocyte uptake assays or have any questions or further inquiries!

Visit our Transporters A-Z collection for more information on the role and importance of hepatic uptake (SLC) transporters and more.